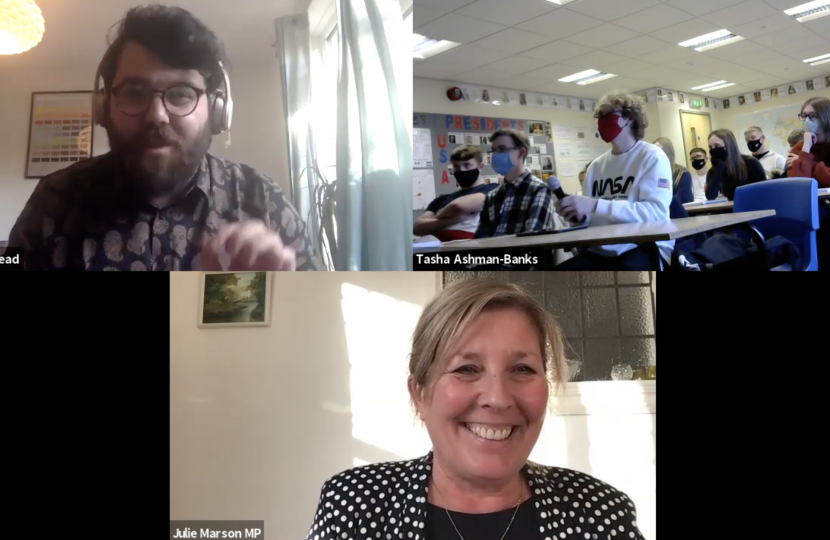 The session, coordinated by The Politics Project - an organisation that provides young people with a comprehensive political education - took place over Zoom.

Before the session, the students’ teacher, Miss Ashman-Banks, prepared them for the Q&A, allowing the students to ask very insightful questions when Julie joined.

“The students at Chauncy School have displayed a first-class knowledge of the role of an MP, asking me about what I’ve been up to at Parliament and how I am helping Ware and the wider community.

“I must thank both The Politics Project and Miss Ashman-Banks for their work in arranging the session and for working with students ahead of time. This preparation really shone through.

“Taking part in UK Parliament Week is really important to me. I knew from a young age that I want to get involved in politics and I am always more than happy to speak to young people in our community about my role in the hope that some will want to get into politics someday.”

"Massive thanks to Julie Marson MP and to Chauncy School for what was a fantastic Digital Surgery. The students were really well prepared by their teacher, Natasha Ashman-Banks, and had fantastic, well-researched questions. Julie answered with warmth and candour, and was a pleasure to work with.

“Digital Surgeries like this one allow young people to have meaningful conversations with the people who represent them, and build positive relationships on both sides. Speaking with the students after the surgery was really heartening, as they described how engaging digitally allowed for a more open conversation."

UK Parliament Week aims to inspire interest in Parliament, politics and democracy and encourage young people and the public to engage with the UK’s democratic system and institutions.

Chauncy School was the second school in our community that Julie had a Q&A session with last week after speaking to pupils from Hunsdon Primary School on 2nd November. Julie says that she speaks to students at local schools most weeks, with visits to Hertford Regional College, Birchwood School and Amwell View in October alone.