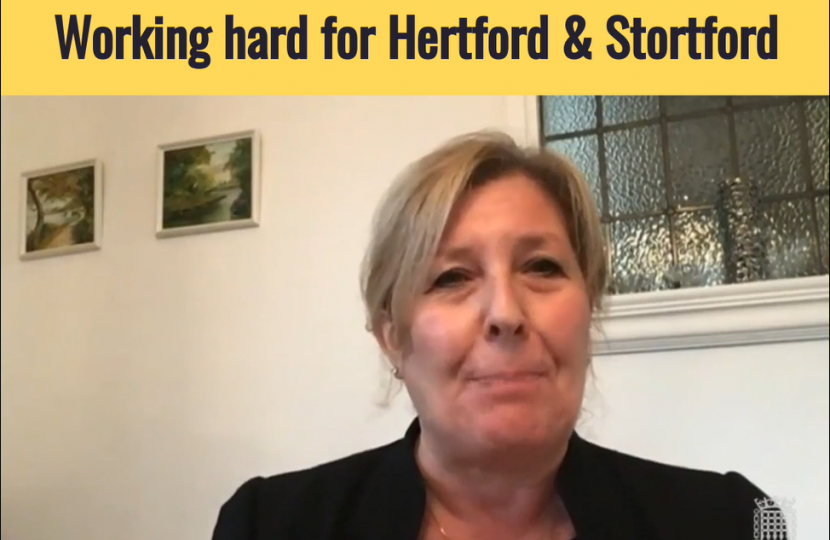 Julie Marson, MP for Hertford and Stortford, has today secured a commitment from Victoria Atkins MP, the Safeguarding Minister, to visit Future Living in Hertford with her when restrictions are lifted.

The exchange occurred earlier today when Julie asked a question in response to the Minister’s statement on measures to tackle domestic abuse and hidden harms during lockdown.

In her question, Julie highlighted the invaluable work of Future Living, a Hertford based charity that supports victims of domestic abuse.

In 2020, Julie was part of the public bill committee for the Domestic Abuse Bill, helping to pass an amendment to recognise children as victims of domestic abuse after conversations she had had with Future Living.

Replying to Julie’s question, the Minister confirmed that she “would be delighted to” visit the charity with Julie when restrictions allow. She also commended Julie’s work on domestic abuse, citing the amendment that Julie helped to pass in 2020.

Commenting after the question, Julie said:

“Domestic abuse is such a critical issue. The team at Future Living in Hertford do amazing work for victims of domestic abuse, supporting them every step of the way. I want to help them as the local MP, hence why I felt it important to ask a question today.

“My colleagues and I have been able to help victims of domestic abuse through our work on the Domestic Abuse Bill Committee. For instance, when the Bill gets its royal assent, it will recognise children as victims in particular incidents of domestic abuse.

“I am very pleased to have secured an on-the-record commitment from the Minister that she will visit Future Living. Clearly, this will occur when lockdown is over, but this shows how committed the Government is to helping us in Hertford and Stortford.”

Julie has pledged to continue to make domestic abuse a priority of hers in this Parliament.

Julie Marson, MP for Hertford and Stortford, has today praised the work of those at the vaccination centres at Bishop’s Stortford Football Club and at Avanti Meadows Primary School, as well as those working so hard at other community vaccination hubs and on mobile units.