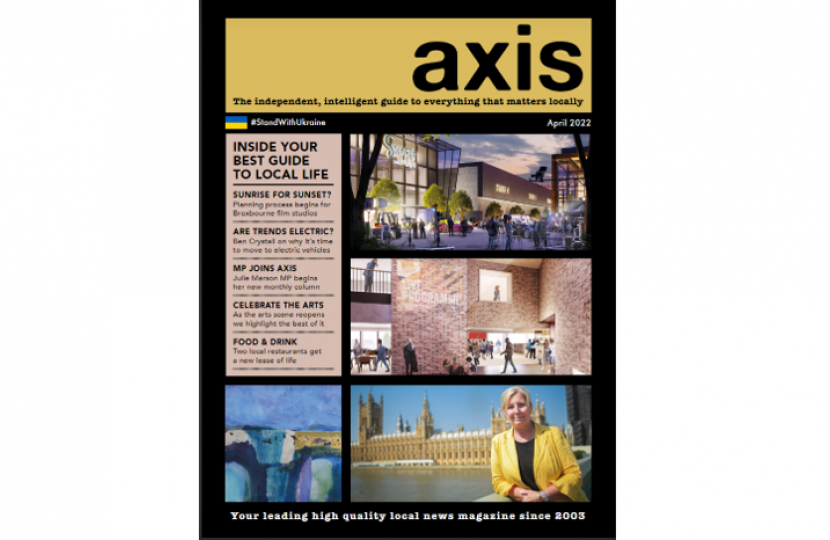 It is an honour to write my first ever monthly column for Axis Magazine. It’s a brilliant local publication printing the stories and features that matter to residents. I have always enjoyed reading it and it is fantastic I now get to write for it too.

Sadly, my first column is all about the terrible events in Ukraine. My heart goes out to all who are suffering.

Russia has illegally invaded an independent and democratic state – a friend of the UK - and we stand in total support of its right to exist against Putin’s tyranny.

I have been in contact with Ukrainians living in Hertford and Stortford over the last few weeks to discuss the situation and feedback their concerns to ministers as they organise aid for the country, including body armour and medical supplies. In addition, my office has dealt with questions, concerns and information for people with friends and family out there.

Meanwhile the Government has helped coordinate the most stringent package of economic sanctions by the West and they are hurting the Russian economy. Assets have been frozen, Russian oligarchs targeted, export bans are in place, access to the financial markets stopped and trade limited.

On the humanitarian side we have done a great deal too. The UK has pledged more than £400 million to help the country.

In the last week or so 21 Ukrainian children with cancer were flown into the UK for life-saving treatment. President Zelensky also personally asked Boris Johnson for mobile generators for places hit by power shortages due to bombing. More than 500 of them will soon be dispatched.

The Government also announced a sponsorship scheme for people to host a Ukrainian refugee in their home for at least six months. In return they will receive a thank you of £350 a month tax free. Councils will receive £10,500 per refugee to help with support with more available for children. A website called Homes for Ukraine to express an interest in hosting has been launched.

The scheme will be expanded over the coming weeks with charities, community groups and churches helping match refugees to hosts. Hosts and those coming here will be vetted.

Ukrainians who come will be given leave to remain for three years, with the right to work and access public services.

As I am writing, around 5000 visas have also been granted to Ukrainians who want to come to the UK and the system has been made easier.

The response from people across Hertfordshire so far has been truly brilliant. I would like to thank all those who will take in Ukrainian refugees into their homes in the coming months and those who have donated money or given supplies.

I think the scheme is a good one and I think the Government has acted promptly and compassionately on many fronts to help Ukrainians fleeing the war while getting really tough with Putin’s regime.

If you need my help on any subject do not hesitate to get in contact via email at julie.marson.mp@parliament.uk.